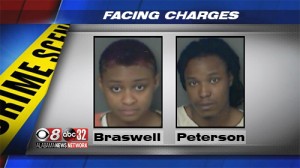 Two people have been arrested in the death of a man whose body was found in Brundidge last week.

The body of 44-year-old Cordero Ousley was found on Floyd Street in Brundidge on Tuesday, April 20.  Ousley was found shot lying face down in a grassy area, which Sheriff Thomas says is a very isolated area with no traffic.

Based on the sheriff’s release, Ousley was lured to Floyd Street by Raven Brassell where he was robbed and shot to death.

From there, authorities say the two suspects went to a hotel in Ozark.

“We worked four long days for a total of 70 hours, almost non-stop, to get a break in the case,” Thomas said in a statement.

Braswell was located in Dothan, and Peterson was found near Eufaula, he said.  They are both in the Pike County Jail.