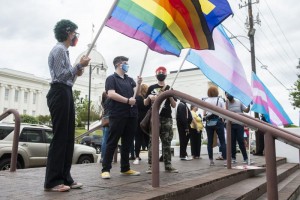 There has been little in the way of tangible repercussions for those states. It’s a striking contrast to the fate of North Carolina a few years ago. When its Legislature passed a bill in March 2016 limiting which public restrooms transgender people could use, there was a swift and powerful backlash.

The NBA and NCAA relocated events; some companies scrapped expansion plans. By March 2017, the bill’s bathroom provisions were repealed. So far this year, there’s been nothing comparable.