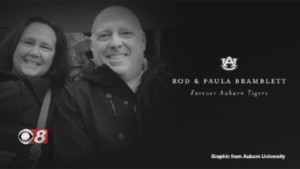 A judge has sentenced a teenager for the 2019 crash that killed Auburn University sports announcer Rod Bramblett, who was known as “The Voice of the Auburn Tigers”, and his wife Paula.

The sentence for 18-year-old Johnston Taylor was not released because he had been granted youthful offender status earlier this month. Taylor faced a maximum sentence of three years.

Taylor had faced two counts of reckless manslaughter. Taylor was 16 at the time of the crash.

As Alabama News Network has reported, court records show Taylor was speeding on the night of May 25, 2019, when he slammed into the back of the Brambletts’ SUV.

The wreck happened at the intersection of Shug Jordan Parkway and West Samford Avenue in Auburn.

The Brambletts and Taylor were taken to East Alabama Medical Center for treatment the night of the wreck. Paula Bramblett died in the emergency room of internal injuries. She was 52. Rod Bramblett died of a head injury after being flown to Birmingham for treatment. He was 53.