B Positive “A Cute Asphyxiation”- TONIGHT at 8:30PM 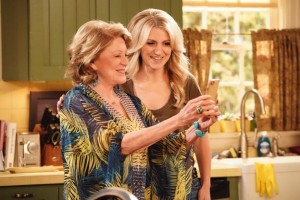 “A Cute Asphyxiation” – Drew and Gina struggle in their new relationships. Also, Norma plans a trip to Italy with Gina.

B POSITIVE is a comedy executive produced by Chuck Lorre and Marco Pennette, starring Thomas Middleditch and Annaleigh Ashford. The series revolves around Drew (Middleditch), a therapist and newly divorced dad who is faced with finding a kidney donor when he runs into Gina (Ashford), a rough-around-the-edges woman from his past who volunteers her own. Together, they form an unlikely and life-affirming friendship, as they begin a journey that will forever impact both of their lives. Kether Donohue stars as Gabby, Gina’s best friend; Sara Rue stars as Julia, Drew’s ex-wife; Izzy G. stars as Maddie, Drew and Julia’s teenage daughter and Terrence Terrell stars as Eli, a new friend of Drew’s who is also going through dialysis.