A man is dead — and a woman is behind bars charged with his murder — after a shooting in Selma early Friday morning.

Police Chief Kenta Fulford says officers responded to a shooting at Valley Creek Apartments at around 1 o’clock in the morning. 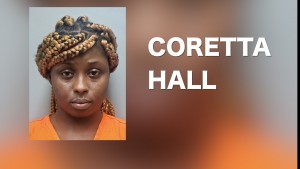 “Upon arrival they found a 23 year old black male laying on the ground with multiple gunshot wounds. They performed CPR on him until EMS arrived. He was later pronounced deceased. We do have a subject in custody,” said Fulford.

Twenty-one year old Coretta Hall of Selma was arrested and charged with murder in the case.

The victim has been identified as 23 year old Darnell Bowie.

The case remains under investigation.

“If anyone have any information or any other witness would like to come forth, please contact the Selma Police Department — 874-2125.”

Anyone with information about the case — can also call Crime Stoppers — 215-STOP.