Should Alabama Remove the Confederate Flag from the State’s Coat of Arms? 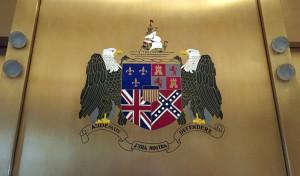 The state coat of arms was designed in 1923 and officially adopted by the Alabama Legislature in 1939. The coat of arms includes the Confederate battle flag and the flags of Great Britain, France, Spain and the United States.