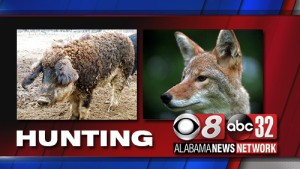 Alabama is making it easier to hunt two animals that are often considered nuisances, coyotes and feral hogs.

The state wildlife agency says a new law signed by Gov. Kay Ivey allows hunters who purchase a license to kill the animals at night. Officials hope the move will help control their populations.

Until now, such hunts are allowed only by special permit.

Coyotes have become more common in the Southeast in recent years. They’re known to prey on farm animals at times and also kill white-tailed deer.

Feral hogs are blamed for causing $50 million in property damage annually in the state.