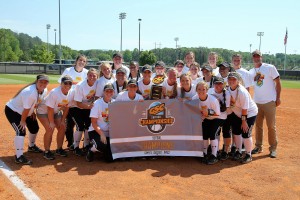 OXFORD, Ala. – For the first time in program history, the Auburn University at Montgomery softball team has captured the Gulf South Conference Championship with an 8-2 win over Mississippi College on Saturday afternoon.

AUM extends their season and earns the GSC’s automatic bid for the NCAA South Region tournament that will take place May 19-22.

The freshmen for AUM got the job done offensively for the Warhawks. Gia Martin had a clutch grand slam in the top of the fifth inning, while Kathryn Fallen added a two-run home run in the bottom of the third for the Warhawks.

Pitching was excellent for the Warhawks again in the championship game. Alanna Goble got the start against the Lady Choctaws and threw three great innings, allowing three hits and two runs.

Bailie Barnes came into the game and tossed the last four innings, allowing just one hit while striking out seven to earn her 15th win of the year.

Scoring for the Warhawks was not an issue to begin the game. With Olivia Aycock on second, fallen hit a weak ground ball to second base, but Aycock noticed a vacated home plate and took advantage of it, scoring the first run of the game.

With Goble rolling through the Mississippi College lineup, Fallen came up in the top of the third after a walk to Molly Cobb and launched her second home run of the tournament over the left center-field wall to give the Warhawks a 3-0 lead.

Senior Kendall Tucker was unable to attend her graduation but made up for it with an RBI single in the fifth inning to extend AUM’s lead to 4-2. Tucker, Chanel Newcomer, Jaycie Walker, Hannah Dailey, and Gracie Poe were all scheduled to graduate today but won the conference tournament instead.

Martin, who is four years away from graduating, came up with two outs and the bases loaded and launched a ball over the left center field wall to connect on her first-career grand slam, sending the crowd into pandemonium and extending the AUM lead to 8-2.

Mississippi College did not make it easy on the Warhawks in the bottom of the seventh, loading the bases with nobody out. Barnes settled in and struck out the next three batters to clinch the championship for the Warhawks.

AUM will await their opponents in the NCAA tournament. The selection show is scheduled for Monday, May 17.