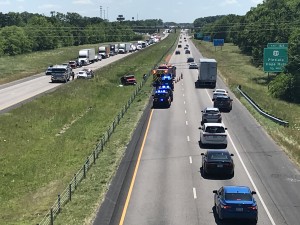 Alabama State Troopers say the crash that backed up traffic on Interstate 65 in Montgomery County on Friday afternoon left a woman dead.

The three-vehicle wreck happened on I-65 at the 164 mile marker, about a mile south of Montgomery.

Investigators say 37-year-old Meco-Takia Waverly of Columbus, Georgia, was driving a Jeep that hit a pickup truck in the rear. The pickup was driven by a 17-year-old from Florida.

The pickup then hit an SUV, driven by 37-year-old Mariza Sia of Decatur, Georgia.

Investigators say Waverly ran off the interstate and into the median, which caused fatal injuries to the front seat passenger, 49-year-old Lolita Thomas of Columbus Georgia. They say Thomas was unrestrained and was pronounced dead at a hospital.