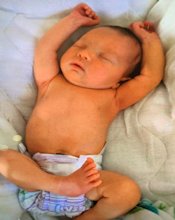 UPDATE: The baby’s father, Caleb Whisnand, Sr., has been charged with capital murder following the discovery of the baby’s body in rural Lowndes County. He is being held without bond.

The body of a missing infant last seen in north Montgomery has been found.

Shortly after, the child’s father, Caleb Michael Whisnand, Sr., was arrested and placed in the Montgomery County Detention Facility after information was developed.

Other details, such as where the baby’s body was found, have not yet been released.