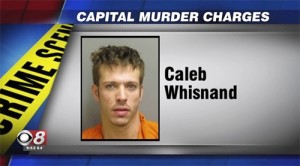 The father charged with capital murder in the death of his one-month-old son has a prior history with law enforcement.

According to court records, 32-year-old Caleb Whisnand, Sr., was arrested on several drug-related charges dating back to December 2017.

In June 2020, Whisnand was arrested and charged with reckless endangerment and possession of a controlled substance in Elmore County after police initiated a traffic stop after noticing a vehicle driving recklessly. Police discovered the driver, who was identified as Whisnand was under the influence of methamphetamine and found some in the vehicle. Court records say that his fiancee, Angela Gardner, and their now two-year-old son were also in the car. Whisnand was arrested on the scene.

This case, along with two other drug-related charges, have all been forwarded to a grand jury.

The latest incident, which was in March 2021, Whisnand was arrested and charged with possession of a controlled substance. Whisnand was out on bond for this case at the time of his arrest for the murder charge.

Whisnand also pleaded guilty to theft of property in the 4th degree from an incident in March 2018.

Whisnand was arrested and charged with capital murder after law enforcement officials say they found the body of his one-month-old son in a remote area in Lowndes County Wednesday. The baby had been reported missing on Monday.