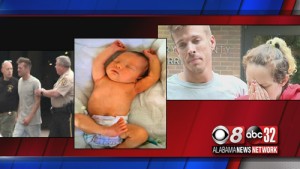 Alabama News Network brought you live coverage of a news conference this morning as Montgomery County Sheriff Derrick Cunningham and others updated the case of the father charged in the death of his newborn son, who had been reported missing.

Cunningham, Chief Deputy Kevin Murphy and Montgomery County District Attorney Daryl Bailey were among those who spoke about the investigation, which still is unfolding.

Last night, the Montgomery County Sheriff’s Office said the father was charged with manslaughter and was being held on a $100,000 bond. After the baby’s body was recovered in rural Lowndes County, an autopsy was performed late last night, which officials say is the reason that the charge was upgraded. The father is now being held without bond.

“The baby’s body was found in Lowndes County out in the rural sector, but as far as the manner of death, we’re still working this case,” Cunningham said. “All of this came to fruition late last night, and were still working with the Department of Forensic Sciences and hopefully we’ll be able to put something out at a later time,” he said.

Cunningham said it is still early in the investigation when asked about several details involving the baby, who had been reported missing Monday. He says they are still pursuing leads. He would not say whether anyone else might be charged.

No details were released on how long the baby’s body might have been in Lowndes County or exactly where his body was recovered.

Cunningham wouldn’t say if drugs might be involved in the case.

The father and the baby’s mother, Angela Gardner, spoke at a news conference yesterday, pleading for the public’s help in finding their son. It was shortly after that news conference that the father was arrested.

There are conflicting accounts as to when the baby was last seen. The parents say the baby was in bed with them Saturday night. But investigators have said the baby was with the father in north Montgomery on Monday, and at the Circle K on Wetumpka Highway late Monday night.

Cunningham wouldn’t say if there was surveillance video from the Circle K that showed anything specific.

He wouldn’t be specific as to why an Amber Alert wasn’t issued on Monday night. He says a lookout was put out, but he says there wasn’t enough information known at the time to issue an Amber Alert.

District Attorney Daryl Bailey says his office is ready to prosecute the case.

“This morning begins the long process of going through the criminal justice system. But one thing I can promise you is that this case will be prosecuted by the best prosecutors in this state, and we will make sure that justice prevails for this baby,” he said.