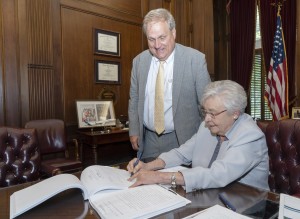 Gov. Kay Ivey has signed a bill into law that will permit marijuana to be used for specific medical needs in Alabama.

There are about 10 qualifying medical conditions which would permit use of medical marijuana. Those qualifying conditions include cancer, HIV/AIDS and epilepsy.

A person would have to get a doctor’s approval before being able to purchase marijuana with a prescription.

Gov. Ivey met with Sen. Tim Melson (R-Florence) as she signed the bill.

“I would like to again thank Sen. Tim Melson and Rep. Mike Ball (R-Madison) for their hard work over the last few years and their willingness to address the legitimate concerns. This is certainly a sensitive and emotional issue and something that is continually being studied. On the state level, we have had a study group that has looked closely at this issue, and I am interested in the potential good medical cannabis can have for those with chronic illnesses or what it can do to improve the quality of life of those in their final days.

“As research evolves, Sen. Melson and I discussed how critical it is to continue finding ways to work on this to ensure we have a productive, safe and responsible operation in Alabama.”