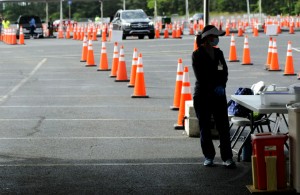 A worker from the University of Alabama at Birmingham waits for patients to arrive on Tuesday, May 18, 2021, at a mass COVID-19 immunization site in Hoover, Ala., where declining demand prompted a shutdown. While initially capable of vaccinating as many as 2,400 people daily, site workers said far fewer people have been showing up for shots even though only about 25% of Alabama’s population is fully vaccinated. (AP Photo/Jay Reeves)

HOOVER, Ala. (AP) — One of the largest COVID-19 vaccination sites in Alabama is closing as dwindling demand forces a shutdown despite the fact that only about 25% of the state’s population has been fully vaccinated. UAB’s drive-up clinic at Hoover Metropolitan Stadium in suburban Birmingham could immunize as many 2,400 people a day when it opened in February. But traffic has slowed to a relative trickle in recent weeks. It’s unclear what has led to the decline, but health officials say vaccine hesitancy is a problem. UAB still has three other large, public sites open in metro Birmingham and will begin operating smaller, short-term clinics.