Some Dallas County residents are having problems with flooding on their property — and around their homes.

People on the 300 block of Henry Street in Selmont — are crying out for help.

They say foul smelling water has collected around their homes. And they want someone to do something about it.

“Somebody! Anybody! With a conscience.” 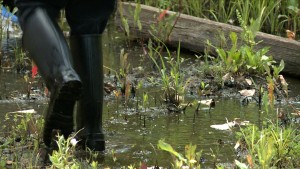 Seventy year old Peter Sheppard, Sr. says he needs knee high rubber boots to get in and out of his house. And he has fish — in his front yard.

“They in there now. You want to go see them,” said Sheppard.

“Right now I can’t even get to the back of my house either,” said Linda Williams.

“I pulled my trampoline up to the front. It’s still water up under it. And back here, I used to go around the back of my trailer, I can’t even get around it. And water still standing with my garbage can out by my garbage. I can’t even even burn garbage.”

“There’s a swamp back there. And I been in contact with the county, the county’s aware of it. There is a beaver dam back behind there. That’s what’s causing the situation. It’s not sewer water,” he said.

Sheppard says about ten other families on the street — are dealing with the same issue — at their houses.

“My house under water since December. I have fish in my yard. These people can’t go out there doors either. And they know this. I done called everybody,” said Sheppard.

County engineer Heath Sexton says the county is working with USDA — to break up the dam — and relocate the beavers.