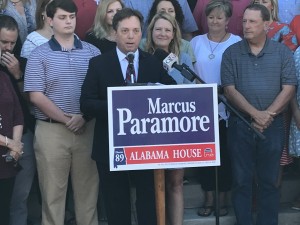 Troy City Council member Marcus Paramore has announced that he’s running for the District 89 seat in the Alabama House of Representatives. He made the announcement this morning on the steps of Troy City Hall.

Paramore is running as a Republican. He is in his second term on city council. He also works for Troy University as director of government relations.

He says if elected, he promises to work hard every day to foster an environment that will allow people to work and businesses to prosper. He says he will promote and protect conservative values.

“The main reason I’m running is economic development, job creation and prosperity for all citizens here in Pike and Dale counties. I feel like my leadership and my vision and my experience on the Troy City Council has prepared me for this, and I want to move forward and make our area a better place,” he said.

The Alabama House District 89 seat is currently held by Republican State Rep. Wes Allen of Troy. Allen has previously announced that he is running for Alabama Secretary of State.

The district represents people in Pike and Dale counties.