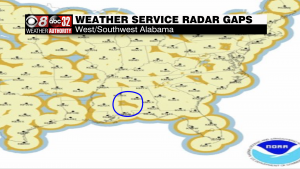 “All those beams, they come to an intersection out there, but they’re not where they need to be as far as the beam height,” Butler explained, “they are a lot higher, the storms are a lot lower, the beams go over the top of these storms.”

Marengo County EMA Director Kevin McKinney knows this problem firsthand.  He says in March, five tornado warnings were issued in one day, but only one tornado was on the ground.

He worries this will lead to warning fatigue, and people won’t react when a tornado warning is issued.

Alabama News Network brought this issue to Congresswoman Terri Sewell.  She represents Alabama’s 7th Congressional District which covers portions of West and Central Alabama.  While she doesn’t have a funding solution now, she says the problem is on her radar and she hopes neighboring states realize this will benefit them as well.

“I look forward to working with my Mississippi colleagues to try to figure out ways that we can leverage the federal resources to be able to provide the critically needed access,” Sewell explained.

To solve the problem, a radar does not need to be built in West Alabama.  It just needs to be closer than the existing radars in Birmingham, Mobile and Jackson, Mississippi.  Marengo County is just one area that will benefit from a solution to this radar gap.  Wilcox, Perry, Clarke, Sumpter and Choctaw counties would also see improved severe weather coverage.