The eighth annual Camellia Bowl is set for Saturday, December 25 at the historic Cramton Bowl in downtown Montgomery. The kickoff is set for 1:30 p.m., CT and the game will be televised on ESPN. 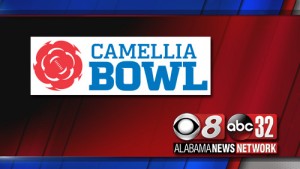 “It’s hard to believe this will be our eighth Camellia Bowl game,” Johnny Williams, Camellia Bowl executive director, said. “We are excited to be back on Christmas Day and continue the tradition this city and stadium have by playing this game. We have had some thrilling games. We are grateful to ESPN for their collaboration and a great bowl lineup.”

Playing on Christmas Day adds to the excitement of Camellia Bowl, which has had some thrilling games with the first seven games decided by 32 total points. All seven games were decided in the fourth quarter, with three games decided on the final play.