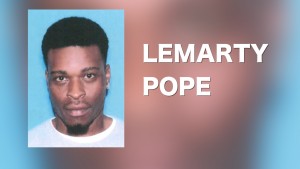 Selma Police have identified a suspect — in one of the the city’s most recent homicides.

Fulford says Pope is considered to be armed and dangerous.

Anyone with information concerning his whereabouts — should call Selma Police at 874-21-25 — or Crime Stoppers at 215-STOP.