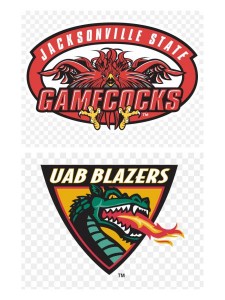 Jacksonville State and UAB will open the college football season at the 2021 Montgomery Kickoff, to be played on Wednesday, Sept. 1, at the historic Cramton Bowl in Montgomery. The game will be televised on ESPN and kickoff is set for 6:30 p.m. CT.

“We are pleased to open the 2021 college football season with the Montgomery Kickoff,” Johnny Williams, executive director of the Camellia Bowl, said. “This will be the first meeting between these two in-state teams in 15 years. I think both fan bases and the local football community will enjoy this matchup at the Cramton Bowl.”

Jacksonville State (10-3) won the 2021 Ohio Valley Conference championship and reached the quarterfinals of the FCS playoffs for the first time since 2015. The Gamecocks won their ninth OVC title in their final season in the league. They are making the move to the ASUN Conference in time for the 2022-23 academic year and will compete in the AQ7 with Eastern Kentucky, Central Arkansas, Sam Houston, Stephen F. Austin, Lamar and Abilene Christian during the transition in the fall of 2021.

UAB (6-3) is the defending Conference USA Champion, after defeating Marshall 22-13 in the C-USA Championship Game last December. The Blazers qualified for a bowl game for the fourth straight year.

UAB head coach Bill Clark and JSU head coach John Grass will be reunited in the season opener. Clark was the head coach of the Gamecocks in 2013, when Grass served as his offensive coordinator. The duo led the Gamecocks to an 11-4 record and to the quarterfinals of the FCS Playoffs, the school’s deepest FCS run to that point.

“It is great for our players to have the opportunity to open the season in primetime on ESPN,” Clark said. “I know Coach Grass will have his team ready and this will be an exciting game for all fans of college football, especially those in the state of Alabama.”

Grass sports a 68-21 (.764) record in seven seasons with the Gamecocks. He has lead JSU to six straight OVC Championships. He was the AFCA National Coach of the Year in 2015. He was named the Roy Kidd OVC Coach of the Year three times.

“We are excited to have the opportunity to play UAB and to kick off the college football season on ESPN in Montgomery,” Grass said. “We’ve been able to open in Montgomery twice and it was a first-class experience. It will be a great college football atmosphere for both teams, as well as our fans.”

JSU will be playing at the Cramton Bowl for the third time in the last five years. The Gamecocks played Chattanooga and North Carolina A&T in the Guardian Credit Union FCS Kickoff in 2017 and 2018.