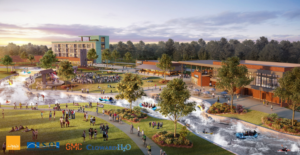 Gov. Kay Ivey will join leaders from Montgomery and Montgomery County to break ground on the long-awaited whitewater recreation center on June 10.

The ceremony will be at 1 p.m. at the corner of Maxwell Boulevard and Eugene Street, near downtown and Maxwell Air Force Base where the center will be built.

The whitewater center was announced in August 2019 and is set to include whitewater rafting, zip lines, hiking, mountain biking, rope courses and more. The 120-acre park is being financed through public and private partnerships. The county is contributing $35 million and the city is contributing land worth $16 million. Some properties were acquired through land swaps with the U.S. Army Corps of Engineers.

Alabama News Network has followed this project since the beginning, when some compared it to a park near Charlotte, NC. We traveled to Charlotte to see for ourselves the U.S. National Whitewater Center and how it’s being used as a model for our park, even though the facility in North Carolina is much larger.

Regardless of size, the Montgomery whitewater center is expected to employ 125 people. It is hoped that it will bring economic  improvements to all of Maxwell Boulevard and provide a vibrant link between downtown and Maxwell Air Force Base.

County leaders say 300,000 people are expected to visit the whitewater facility each year. To put that number in perspective, around 225,000 people visited the Montgomery Zoo in 2019.

Details are still being worked out on selling the Salvation Army headquarters, which sits on the land where the whitewater center will be built. The Salvation Army would move its operations to another location, which hasn’t been announced.

The COVID-19 pandemic has delayed the timeline, pushing the projected opening of the whitewater center from 2022 into early 2023.  Already, a construction information workshop has been held for people hoping to help build the center, which will provide a boost to workers impacted by the pandemic.

Stay with Alabama News Network for continuing coverage of this story.