Today is a sad day at Alabama News Network. We are saying goodbye to Alabama News Rising anchor Andrew James.

Andrew is leaving us after five years for a position with WLOS, the ABC station in Asheville, North Carolina. He and his wife are from North Carolina, so this move will get them closer to family.

WLOS is part of the large Greenville-Spartanburg-Asheville TV market, which spans western North Carolina and much of the upstate of South Carolina, so this represents a step up in his career.

Gov. Kay Ivey took time to send Andrew a handwritten note, which he read on the air during his final broadcast this morning. She thanked Andrew for making Alabama a part of his life’s journey. 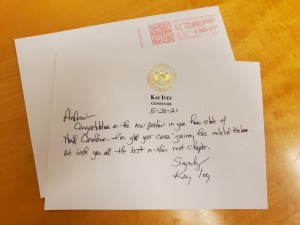 Besides being a key part of the success of Alabama News Rising, Andrew has been a tenacious reporter, breaking many stories along the way. He has taken a keen interest in Montgomery’s whitewater recreation center project, reporting on new developments and even reporting from the U.S. National Whitewater Center, which Montgomery is using as a model.

Andrew joined us after graduating from the University of North Carolina-Charlotte and after working behind the scenes for WCCB, our company’s flagship station in Charlotte. Everyone at Bahakel Communications, LTD. wishes him the best.

Thanks for everything, Andrew!