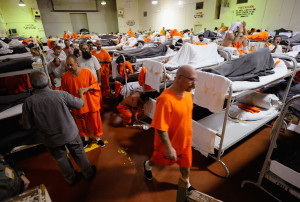 MONTGOMERY, Ala. (AP) — Alabama lawmakers have approved a program that would allow some state inmates to receive up to a year off their sentence by completing vocational or other training, although most prisoners will not be allowed to participate.

An estimated 2,500 inmates out of state prison population of about 20,000 will be eligible to participate in the new program called the Alabama Education Incentive Time Act. It will allow inmates to earn up to 12 months off their sentence by completing vocational, apprenticeship, or other educational programs.

Supporters acknowledged that relatively a few inmates would qualify for the program, but called it a start that the state could build upon in the future.

Sen. Clyde Chambliss, who sponsored the legislation, said research shows that inmates who complete quality education programs are much less likely to return to prison.

“If they can get a job when they get out, then they have a fighting chance,” Chambliss, R-Prattville, said.

However, the law as approved by lawmakers would exclude most state inmates under Alabama law. The program excludes inmates convicted of violent offenses, which under Alabama law includes many robbery and burglary convictions.

Chambliss said state numbers showed an estimated 2,500 inmates would currently be eligible to participate. As of March, there were 16,907 inmates housed in state prisons, work release and community work centers and about 8,000 more in the jurisdictional custody of the Alabama Department of Corrections.

Chambliss called the bill a compromise. He said an earlier version would have let about 1,500 more inmates qualify.

Cam Ward, director of the Alabama Bureau of Pardons and Paroles, said qualifying inmates will get considered for parole earlier, although the release decision will be up the state parole board.

“It is a small number. But if it works than you can build upon it going forward,” Ward said. “It’s a great idea.”

The Alabama Legislature has been slow to embrace sentencing changes. Ward, a former state senator and representative, said such a bill would have never passed five or six years ago.

The law will exclude inmates from participating if they have been convicted of a class A or B felony classified as violent under Alabama law. However, state law classifies some robbery and burglary offenses as violent.

“We all think when we hear violent — rape, murderers, child molestation, stuff like that, assault. In many cases you can have a burglary or robbery where a person was not physically harmed,” Ward said.

The legislation directs the Alabama Department of Corrections to get rules in place for the program next year.

The U.S. Department of Justice has an ongoing lawsuit against the Alabama prison system. Federal officials contend male inmates in Alabama prisons live in unconstitutional conditions with high rates of inmate-on-inmate violence and a pattern of excessive force by staff. The state has disputed the findings.