The Selma City Marina is in need of dredging. So, some area boaters have raised thousands of dollars to help the city get it done.

They say right now, the water at the mouth of the marina leading into the river — is less than two feet deep.

“You can wade across it right there at the entrance to the river,” said Jerry Hatfield of Selma.

And Hatfield says as a result — going in and out of the marina could cause major damage to a boat engine. 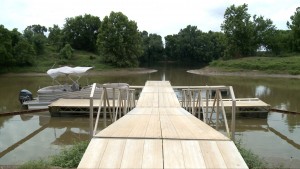 “When you do try to get out, you’re sucking mud because it’s so shallow. And we know that’ll destroy a water pump,” Hatfield said.

“Well, when you have what we have at the mouth of this marina right now, you pull mud and silt into the bottom of your engine. And it’ll clog up your engine and you can have overheating problems,” said Rex Jones.

“So, you really have to be aware not to pull too much of that mud into your engine or else you can ruin an engine that could be $20,000 dollars.”

Selma boaters are passionate about spending time on the river. Because they say for them — being on the river is not just something they do — it’s a part of who they are.

“It means a lot to me because it was part of what I did when I grew up,” Jones said.

Jerry Hatfield has spear-headed a fund raising effort to pay for dredging the marina.

Now the city is working to get the permits needed to get the work done.

“We’re going to be the rest of the summer and still no work being done. We’re gon’ have the funds and there are other things that need to be done. So, we’re not gon’ spend the dredging money, but we’ll be upgrading this marina in other ways.