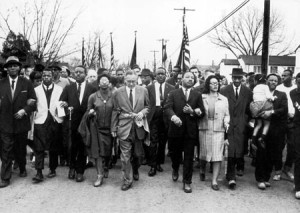 BIRMINGHAM, Ala. (AP) – A new assessment of endangered historic places is highlighting spots in Alabama along the route of the Selma-to-Montgomery march for voting rights in 1965. A list released by the National Trust for Historic Preservation says four campsites used by marchers nearly 60 years ago are in danger of being lost. They’re among 10 other locations in nine states that are considered to be in need of preservation. The march occurred two weeks after demonstrators were beaten in Selma while attempting to walk to Alabama’s capital in support of voting rights. Three of their campsites are on privately owned, rural land. The fourth is a Roman Catholic complex in Montgomery.