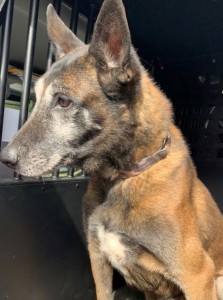 The Alabama Law Enforcement Agency has announced the death of one of its canine officers.

This is the complete statement from ALEA:

It is with deep sadness and regret that the Alabama Law Enforcement Agency (ALEA) must announce the passing of one of the agency’s Explosive Detection K-9s. K 9 Indy passed away on Friday, June 4.

K-9 Indy began his career in 2011 and has faithfully served alongside his handler, a Special Agent with ALEA’s Bomb Squad, which is a highly trained specialized unit within the State Bureau of Investigation (SBI). The Bomb Squad is responsible for the safety and well-being of both citizens within Alabama as well as across the nation. They provide protection to first responders and individuals that respond to and are involved inexplosive-related incidents.

K-9 Indy has served in a multitude of major events, providing protection at Presidential Inaugurations in Washington, D.C. including President Carter, Clinton, Bush, Obama, Trump and Biden. He also worked the 2018 Super Bowl in Atlanta, Ga.

“Explosive Detection Dogs not only play an integral role within ALEA’s protection capabilities but are also a vital resource to surrounding agencies as we work with our law enforcement and public safety partners to ensure the security of our citizens and communities while attending major events,” said ALEA Secretary Hal Taylor. “We are deeply grateful for K-9 Indy’s hard work and years of faithful service. He will truly be missed.”