The Marengo County Sheriff’s Office is searching for a missing Sweet Water man who disappeared last week — without a trace. 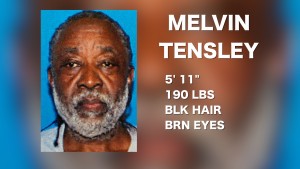 “You gon’ see Pop everyday riding around in his truck,” said Jacqueline Harris.

Tensley’s truck was found parked at a friend’s house Wednesday. However he’s been nowhere to be found — and his family hasn’t been seen or heard from him since.

“If he was gon’ go somewhere, his mother would know,” said Harris.

Tensley takes care of his mother. And the two keep in very close contact.

“Matter of fact, he live right there next to his mother. And he check on her two or three times a day.”

“He doesn’t just up and leave like this,” Harris said.

“And not answering the phone. Not calling. This is not Melvin. And so we all as a community, we worried about him.”

Tensley’s mother Jessie Mae McDonald is concerned about her son’s well-being — and she’s praying for his safe return.

“Yes, I’m very much worried. Cause that’s the only son I got,” she said.

Authorities are searching for Tensley on the ground — and by air. But they would not say whether or not they suspect foul play in his disappearance.

Anyone who can help authorities find Melvin Tensley — call the Marengo County Sheriff’s Office at (334) 285-4208.