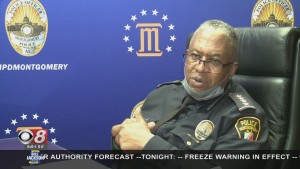 Mayor Reed issued the below statement on Chief Finley’s departure:

“We are grateful to Chief Finley for his service to the city of Montgomery and his dedication to doing what is right for our community. His work to implement community policing measures increased trust, transparency and accountability within MPD and the city.

While violent crime rates have climbed across the nation, Montgomery has fared much better than other cities our size; but I am convinced we can and must do more. Chief Finley has done a tremendous job with the task he inherited in 2015. Notably, Montgomery was the only major city in the state of Alabama that did not suffer damage during last summer’s civil unrest, but the situation and circumstances have changed. I feel it is in the best interest of the men and women of the Montgomery Police Department, as well as the residents of Montgomery, to make a change in leadership.”

Finley was sworn into office as Montgomery’s 14th police chief on January 20, 2015. A 29-year veteran of the Atlanta Police Department, Finley was the Deputy Chief and assigned as the Field Operations Division Commander. Born and raised in Newark, N.J., Finley earned a bachelor’s degree from Rutgers University and joined the police force in Atlanta in 1986. He has a master’s degree in public administration from Columbus State University.