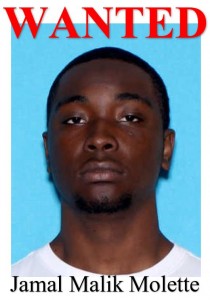 On June 9, 2021 around 7:00 pm, Molette’s ex-girlfriend and stepfather went to get her vehicle. The vehicle was located at Molette’s residence. When they arrived, Molette damaged the victim’s car by ripping off the front bumper. As the ex-girlfriend and stepfather were leaving, Molette fired several rounds into both vehicles. The type of firearm used was not specified.

Charges for Molette include: 2 counts of Discharging a Firearm into an Occupied Vehicle, 2 counts of Attempted Murder, and Domestic Violence 2nd Degree.

If you have any infomration on his whereabouts, call Crimestoppers at 215-Stop.