FOR TODAY: A weak front will slowly push through Alabama during the day and will allow showers and storms to develop ahead of it, especially this afternoon and evening. It will be a hot and humid day with highs in the mid-90s.

Tomorrow will be mainly sunny and hot with highs in the mid to upper 90s, rain chances will be much lower with only a few isolated storms across South Alabama. Wednesday through Friday it will be slightly cooler with lower humidity levels with plenty of sunshine on each day. Humidity levels will start to creep back up on Friday, so it will be a little less comfortable. No rain at this time through Friday night. Highs will be in the upper 80s Wednesday followed by to the lower 90s Thursday and Friday.

IN THE TROPICS: Two areas of concern, and one we are going to watch carefully as it will be in the Gulf. The next two names are Bill and Claudette. 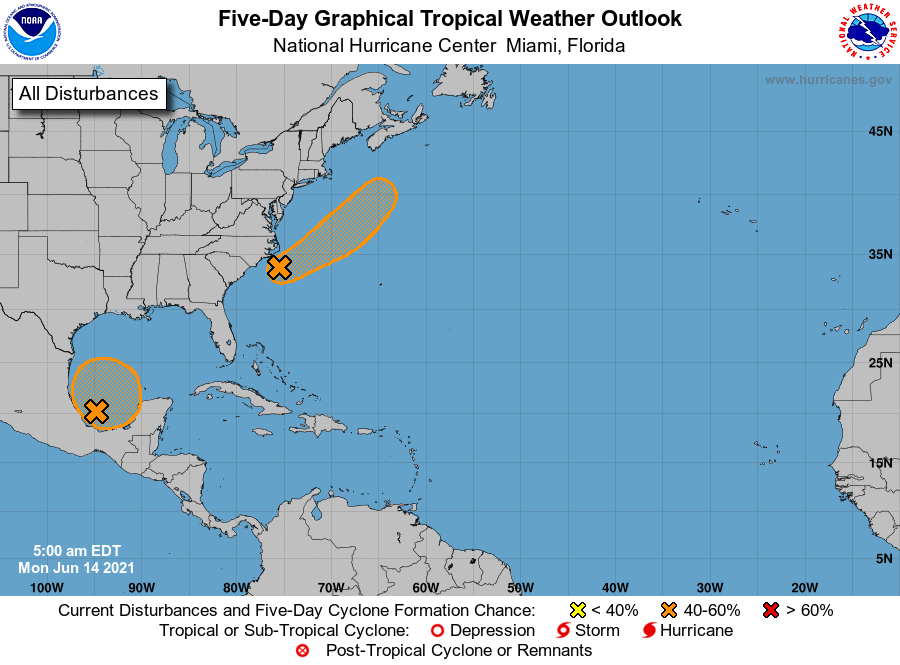 1. A large area of cloudiness and showers located over the Bay of Campeche is associated with a broad low pressure area. Some slow development of this disturbance is possible during the next few days while it meanders near the coast of Mexico, and a tropical depression could form late in the week when the system begins to move slowly northward. Regardless of development, heavy rainfall is possible over portions of Central America and southern Mexico during the next several days. Formation chance through 5 days…medium…50 percent.

2. Updated: A well-defined, non-tropical low pressure system is located about 120 miles south of Cape Hatteras, North Carolina. Satellite and radar data indicate that thunderstorm activity has continued to increase and become more concentrated near the center of the low early this morning, and environmental conditions are expected to be at least marginally conducive for tropical cyclone formation. If this recent development trend continues, then a short-lived tropical depression or tropical storm could form later today while the system moves northeastward away from the United States. The low will move over colder waters south of Nova Scotia on Wednesday, ending any opportunity for further development. Formation chance through 48 hours…medium…50 percent.

WEEKEND WEATHER: It looks like we may have some tropical moisture to deal with starting on Saturday afternoon as we’ll have a potential tropical system moving onshore to our south-southwest. More of that moisture moves in on Sunday as the low is modeled to be somewhere in west-central Mississippi. While it is still too early to be certain on track or strength, this system looks to bring heavy rainfall to Alabama this weekend or early next week. Temperatures this weekend will be in the 80s with very humid conditions due to the tropical air mass in place. A lot can and will change in the coming days with this system, so stay tuned.

Have an outstanding Monday!!!
Ryan

Oppressive Heat And Near-Zero Rain Chances To End The Week