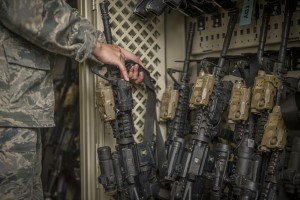 ANNISTON, Ala. (AP) — Military weapons including pistols and submachine guns have been lost or stolen from bases in Alabama.

An Associated Press investigation into firearms missing from the U.S. armed services shows at least 39 guns disappeared or were recovered in Alabama between 2010 and 2019.

The weapons are among at least 1,900 U.S. military firearms that AP learned were unaccounted for during the last decade. Intended for war, some guns ended up on America’s streets. Army pistols, for example, were used in violent crimes including shootings and robbery. Military officials say missing firearms are a tiny fraction of their stockpile, and note that some are recovered.