MONTGOMERY, Ala. | The 2021 ABCA/Rawlings NCAA Division I All-Region teams were announced Wednesday morning in all eight regions, with Alabama State represented by Santiago Garcia and Trenton Jamison on the Southeast Region Second Team.

The teams are voted on by members of the American Baseball Coaches Association and the process is led by the ABCA NCAA Division I All-America Committee, which is chaired by Tommy Raffo of Arkansas State. 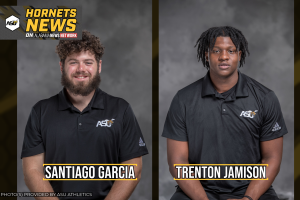 Garcia was chosen as the Second Team designated hitter after being selected first team All-SWAC at the same position. He finished the year hitting .324 for the Hornets in 40 games with a 1.124 OPS, collecting 45 hits in 139 official at-bats. Garcia scored 38 runs and knocked in another 43 – tied for the team lead – while also collecting 27 extra base hits including 15 doubles and a team-high 11 home runs. He finished the year with a .683 slugging percentage and a .441 on-base percentage.

Meanwhile, Jamison – a Dick Howser Award semifinalist – was named Second Team as a third baseman after earning second team All-SWAC. He finished the year hitting .390 with a 1.094 OPS in 39 games this season, collecting a team-high 64 hits in 164 official at-bats. He finished the year with a team-high 44 runs scored and 43 runs batted in. He also collected 22 extra base hits including 12 doubles and eight home runs, while slugging .634 and recording a .460 on-base percentage.

The duo were the only members from a Southwestern Athletic Conference (SWAC) institution among the eight regions.

The ABCA, founded in 1945, is the primary professional organization for baseball coaches at the amateur level. Its over 13,000 members represent all 50 states and 23 countries. Since its initial meeting of 27 college baseball coaches in June 1945. Association membership has broadened to include eight divisions: NCAA Division I, II and III, NAIA, NJCAA, Pacific Association Division, High School and Youth.

About Rawlings
Rawlings Sporting Goods Company, Inc. is an innovative manufacturer and marketer of sporting goods worldwide. Founded in 1887, Rawlings is an authentic global sports brand, trusted by generations of athletes of all skill levels. Rawlings’ unparalleled quality and expert craftsmanship are the fundamental reasons why more professional athletes, national governing bodies and sports leagues choose Rawlings. Rawlings is the Official Ball Supplier and Batting Helmet of Major League Baseball, the official baseball of Minor League Baseball and the NCAA, and an approved baseball, basketball, football, and softball of the National High School Federation. For more information, please visit Rawlings.com or by phone at (314) 819-2800.