FOR TODAY: Showers and storms will begin to increase in coverage along the Gulf Coast and through South Alabama as moisture levels rise ahead of the tropical system. Highs today will be in the lower 90s.

POTENTIAL TROPICAL CYCLONE THREE: It is only a matter of time before we get a depression and likely Claudette to form in the Gulf…As of this morning, the poorly defined disturbance was centered near latitude 25.2 North, longitude 91.5 West. The system is moving toward the north near 14 mph, and this general motion is expected for the next day or so. On the forecast track, the system will approach the north-central Gulf Coast tonight or early Saturday. A slow northeastward motion across the southeastern United States is likely after landfall through the weekend. 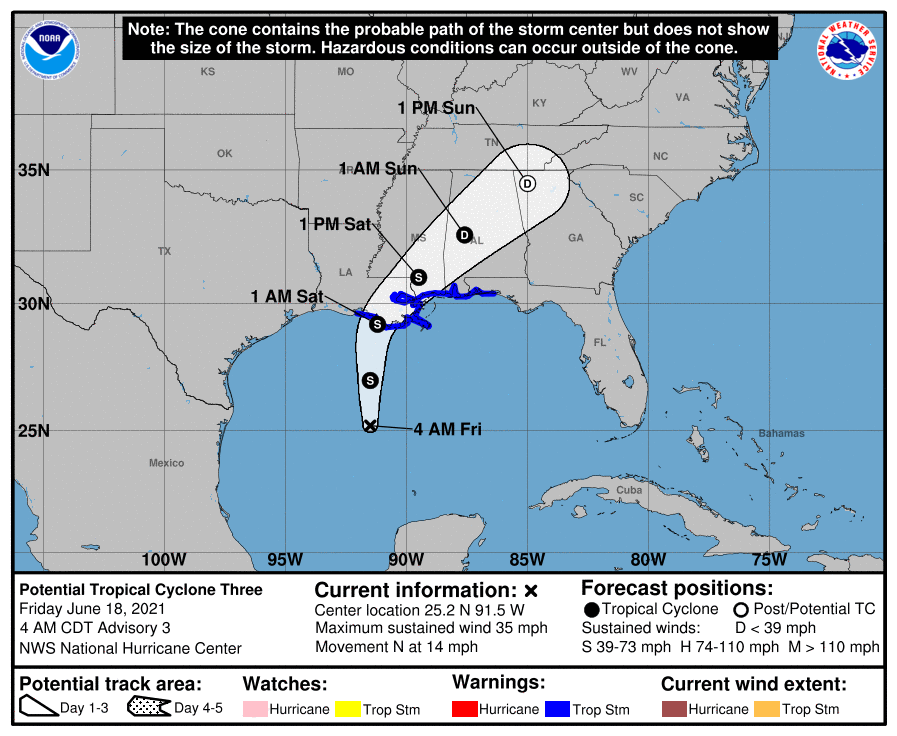 Maximum sustained winds are near 35 mph with higher gusts. Some strengthening is forecast, and a subtropical or tropical storm is likely to form over the west-central or northwestern Gulf of Mexico later today.The estimated minimum central pressure is 1007 mb (29.74 inches), based on observations from NOAA buoy 42001.

FOR THE WEEKEND: This feature will track north through the western Gulf of Mexico, making landfall along the Louisiana Coast late tonight, then track northeast through the Deep South this weekend. Alabama is east of the center of circulation, which is the “wet side” of the system, meaning very heavy rainfall will impact Alabama, possibly leading to flash flooding, but also we need to mention the potential for quick, spin-up tornadoes. A flash flood watch is in effect for all of Central and South Alabama through Sunday. 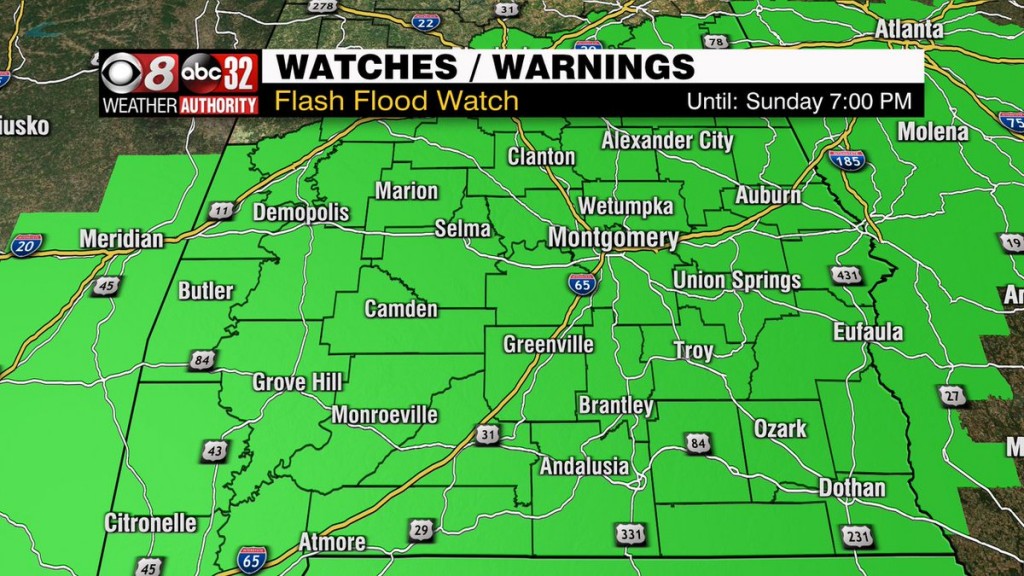 Rain overspreads the state through the day tomorrow, continuing at times Saturday night and into Sunday, by Sunday night, the system will be northeast of the state. Rainfall will be the biggest threat with this system as it looks like most of Alabama will see a soaking. Rainfall amounts for much of Alabama this weekend will be in the 3-6 inch range, with higher amounts likely, especially over the southwest counties. 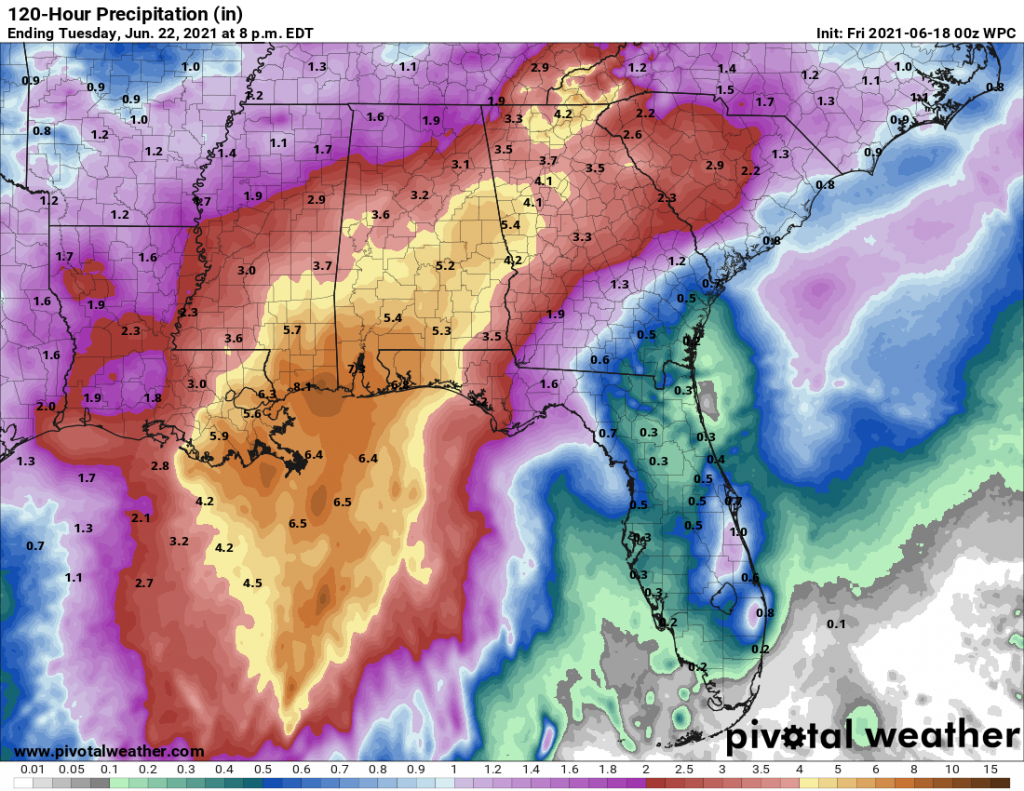 Again, we will have to watch for a few brief, isolated tornadoes Saturday, Saturday night, and early Sunday over much of Central and South Alabama; SPC has defined a “marginal risk” (level 1/5) for these areas. 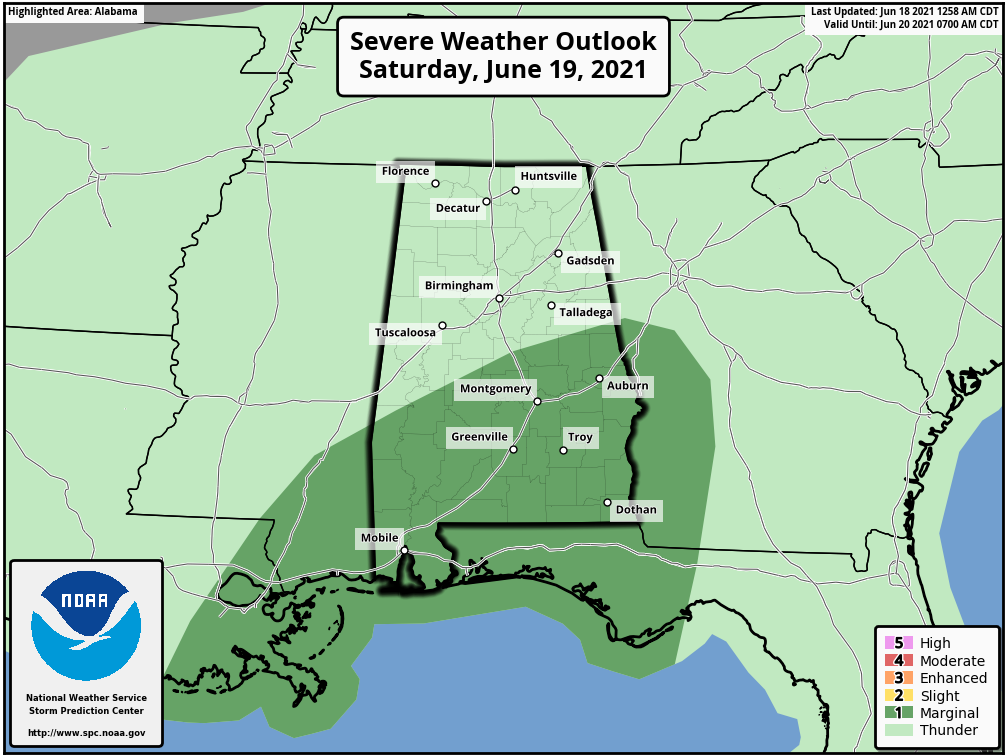 FOR NEXT WEEK: As the system exits the state late Sunday, very deep moisture will be left behind, and periods of rain will continue Sunday night into Monday. In fact the very humid air mass looks to linger over the state much of next week, allowing for widespread showers and storms through midweek. Highs next week should be in the 80s.

Scattered Showers and Storms Remain in the Forecast