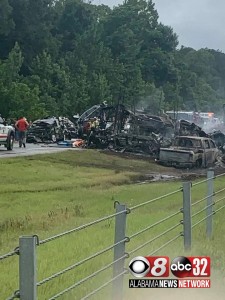 Ten people were killed in a fiery 17-vehicle wreck on Interstate 65 in Butler County on Saturday, June 19, 2021 – Alabama News Network

Alabama News Network has learned that investigators from the National Transportation Safety Board will be going to Butler County to examine Saturday’s crash that killed 10 people, nine of them children.

A total of 17 vehicles were involved in the wreck on Interstate 65 NB between Greenville and Fort Deposit. Local investigators believed rain from Tropical Storm Claudette may have been a factor and may have caused at least one vehicle to hydroplane.

ALEA says seven of the vehicles were on fire when state troopers arrived on the scene.

Ten NTSB investigators are scheduled to arrive in Alabama tonight.

Eight of the people killed were in a small bus from the Tallapoosa County Girls Ranch. The other two  were in an SUV.