Some expressed concern about road safety at fatal wreck site 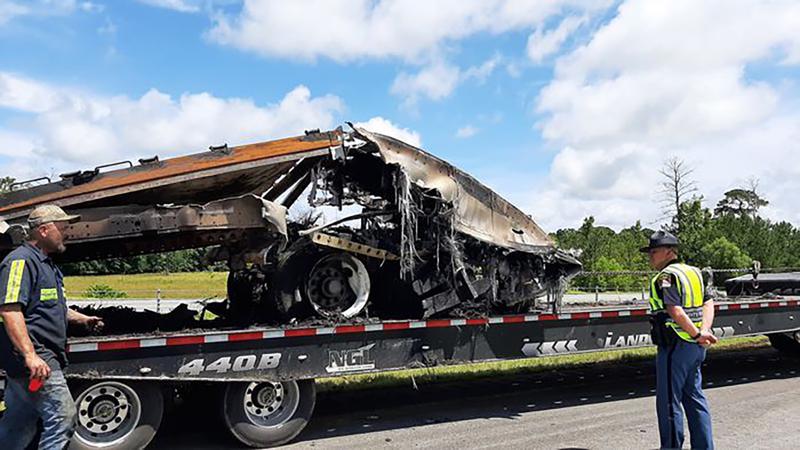 BIRMINGHAM, Ala. (AP) — Local officials were concerned about the safety of a heavily traveled stretch of Interstate 65 where 10 people died in a fiery crash long before the pileup last weekend, and the road itself could become part of the investigation into the wreck.

State Rep. Chris Sells said he and Butler County Coroner Wayne Garlock inspected the wreck area weeks ago after he heard complaints it was a “hot spot” with potential problems even though only sporadic accidents had occurred there through the years.

He said the area is too congested, and a lengthy downhill slope can lead to both excessive speed and the pooling of water after a storm. Combine that with drivers following too closely and not paying attention and tragedy can occur, Sells said Wednesday.

“It’s not like this was a particularly deadly area – it’s not,” said Sells, of Greenville. “But it is now.”

Garlock said the highway near the crash scene is “is notorious for hydroplaning because of the way the road is made,” but declined to go into details about his concerns citing the continuing investigation into the crash.

“It’s not just me. A lot of people are concerned with certain areas,” he said. Alabama has plenty more potentially dangerous places on roads, he said.

An investigation into the causes of the multiple vehicle pileup that killed nine children and one adult could take months, and it will consider factors including actions by drivers, equipment, weather, and the road itself, according to the National Transportation Safety Board.

“It is a strong possibility that from the examination and documentation of the scene, NTSB will look into the design and conditions of the roadway. In many highway investigations, those issues are reviewed,” spokesman Keith Holloway said in an email.

Multiple vehicles collided on Saturday afternoon on northbound I-65 as Tropical Storm Claudette dumped rain on the Southeast. It’s unclear exactly what happened, but eight children died in a youth home van that was among 17 cars, tractor-trailers, and pickup trucks involved in a wreck that ended with seven vehicles aflame.

The main road leading to beaches in the Florida Panhandle and Alabama, I-65 is known for heavy congestion, particularly around summer weekends when people are driving to or from vacation. The van was headed back to the Tallapoosa County Girls Ranch, located northeast of Montgomery, after a trip to the beach town of Gulf Shores.

Holloway said the NTSB investigation is ongoing and “no conclusions will be drawn at this early stage in the investigation and only factual information will be released when available.”

A preliminary report could be available in about a month and the full NTSB investigation could take between 12 and 25 months before any conclusions are made, he said.

Records show the Alabama Department of Transportation plans to spend $12 million resurfacing a section of the highway that includes the wreck site, but the projects were put out for bids months ago as part of a routine maintenance program.

A resurfacing project doesn’t indicate that engineers knew of a problem on a stretch of road, said department spokesman Tony Harris.

’Those resurfacing projects are planned as far as two years out. It is part of our ongoing, interstate maintenance program,” Harris said.

The wreck happened about 30 miles (about 48 kilometers) southwest of Montgomery near the bottom of a long grade that leads to a bridge that spans a wet-weather creek. Sells said there have been worries about the collection of water at the spot and the speed that many vehicles build up on the way down the slope.

Also, he said, traffic has gotten heavier on the road through the years. The most recent figures showed about 33,000 vehicles a day on a stretch near the wreck site in 2019, an increase of about 8% from five years earlier.

“What I hope the NTSB comes away with, and they’re going to hear it from me, is that this road is overcrowded,” Sells said, adding: “There’s just no room for error out there now.”

(Copyright 2021 The Associated Press. All rights reserved. This material may not be published, broadcast, rewritten, or redistributed.)