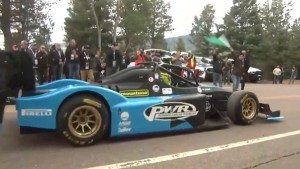 The car with the quickest time overall was this 2018 Wolf GB08 TSC-LT driven by Robin Shute of Old Buckenham, Norfolk, U.K. – From: Pikes Peak Live, Presented by Mobil 1

Alabama News Network and Bahakel Sports, a division of our parent company, brought you live coverage of The Broadmoor Pikes Peak International Hill Climb, brought to you by Gran Turismo.

“Pikes Peak Live, presented by Mobil 1” brought you all of the action on our website, mobile app and Facebook page. Our coverage was also sponsored by Bojangles and Optima Batteries.

The drama started before the first car took the green flag. Snow, ice and fog at the top of the summit, which is more than 14,000 feet above sea level, forced the race course to be shortened from its normal 12.42 mile length, eliminating some of the 156 turns. The change delayed the hill climb for about an hour.

But a total of 56 drivers were still able to make their individual runs up the mountain. There were no crashes to mar the day’s excitement, though a few drivers did experience mechanical issues. 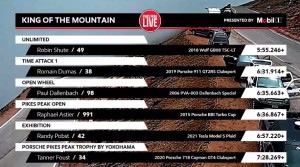 King of the Mountain: Fastest times in each of the six divisions – From: Pikes Peak Live, Presented by Mobil 1

Alabama’s Layne Schranz finished second in the Pikes Peak Open Division, driving a 2016 Chevrolet SS. He finished with a time of 6:45.351.

Camera views near the newly-set finish line showed some drivers still had to battle limited visibility near the end of the course, while the view was clearer for others. 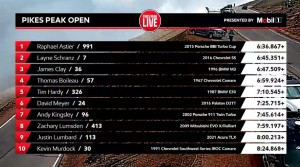 The day started with a 1974 Datsun 240Z in an exhibition run and ended with a 2010 Mazdaspeed 3. In between, fans could watch Porsches, Audis, Acuras, Ford Mustangs, Teslas and many other highly-modified vehicles take their turn on the course.

This year was the 99th running of the Pikes Peak International Hill Climb, which began in 1916, missing a few years because of wartime.

It’s hoped that next year’s 100th running will be able to be held using the full course route up to the top of Pikes Peak.

Daytime Shower/Storm Chances Throughout The Week