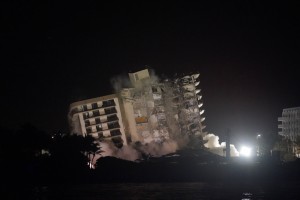 Rescuers have resumed their search for victims at a collapsed South Florida condo building after demolition crews set off a string of explosives that brought down the structure in a plume of dust Sunday night.

Rescuers were given the all-clear not long after the 12-story high-rise came tumbling down Sunday night.

Crews began clearing the new debris so rescuers could start making their way into parts of an underground garage of particular interest in the search for 121 people still unaccounted for. The first portion of the Champlain Towers South building collapsed on June 24.

No one has been found alive since the first hours after the disaster.

Search efforts were suspended Saturday to allow demolition crews to drill holes for the explosives needed to bring the building down. Concerns had mounted that the damaged Surfside building was at risk of falling on its own. The approach of Tropical Storm Elsa added to those concerns.