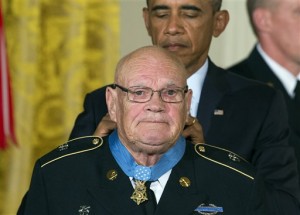 Enterprise was chosen as the new home’s location in January. It will be built on 108 acres off Highway 51 just north of Yancey Parker Industrial Park.

Adkins was deployed to Vietnam three times, with his most heroic effort during his second tour leading to receiving a Medal of Honor from President Obama in 2014. He distinguished himself during 38 hours of close-combat fighting while serving as an Intelligence Sergeant with the 5th Special Forces Group at Camp A Shau in the Republic of Vietnam in 1966.

When the camp was attacked, then Sgt. 1st Class Adkins rushed through intense enemy fire and manned a mortar position defending the camp. He continued to mount a defense even while receiving several direct hits from enemy mortars. He temporarily turned over the mortar to another soldier and ran through exploding mortar rounds to rescue several soldiers wounded near the center of camp. By the end of the battle, Adkins was hit 18 times by enemy fire.

“Command Sgt. Maj. Bennie Adkins is an American hero who was well-known statewide for his bravery and heroism, especially in southeastern Alabama with his close ties to the community,” said SBVA Vice-Chairman Chad Richmond. “Command Sgt. Maj. Adkins was loved by everyone who knew him, and it is an honor to have his name on the new state Veterans home.”

Adkins served his country for more than twenty years in the Army, the majority of his time spent in Special Forces (Green Berets).

After his retirement, he continued his education, eventually obtaining his Bachelor’s degree and two Master’s degrees from Troy University. He then established his own accounting firm and operated for 22 years until retirement. He died of COVID-19 in April 2020 at the age of 86.

Williams Blackstock Architects in Birmingham is the designer of the new veterans home. The facility will be 182,000 square feet and house 175 residents. Once in full operation, it will provide jobs for more than 200 people.

ADVA Commissioner Kent Davis says ground will be broken early next year. This will be Alabama’s fifth state Veterans home, and construction is expected to be completed at the end of 2023.