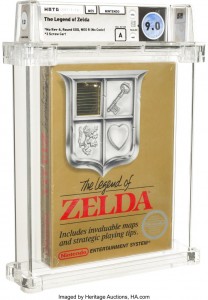 Heritage Auctions says the video game sold Friday. The auction house says it was a rare version that was created during a limited production run that took place during a few months in late 1987.

The Legend of Zelda is a popular fantasy adventure game that was first released in 1986.

In April, the auction house sold an unopened copy of Nintendo’s Super Mario Bros. that was bought in 1986 and forgotten about in a desk drawer for $660,000.