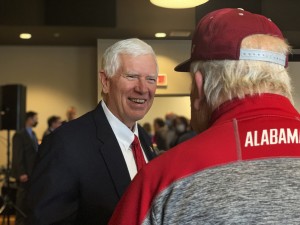 Britt said Saturday that it’s a sign of her campaign’s momentum and fired back that she didn’t need anyone to fight her battles.

Trump in a statement reiterated his support for Brooks and took jabs at senators, including U.S. Sen. Richard Shelby of Alabama and U.S. Sen. Mitch McConnell of Kentucky. Britt was Shelby’s chief of staff but left to lead an influential business group.

Trump, in a statement, said Britt, is “not what Alabama wants.”

“I see that the RINO Senator from Alabama, a close friend of Old Crow Mitch McConnell, Richard Shelby, is pushing hard to have his ‘assistant’ fight the great Mo Brooks for his Senate seat,” Trump wrote in a statement, using the expression for “Republican in name only.”

Britt posted a video Saturday that didn’t mention Trump by name but said she responded to a statement about her candidacy.

“What I want to tell you is that doesn’t scare me. I’m here to fight for you,” Britt said in a video posted on her campaign’s Twitter account.

“It is clear that our message is resonating. People are ready for something new. They are ready for fresh blood, fighting for Christian conservatives and putting Alabama first. That is what people want,” Britt said.

Shelby, who is retiring at the end of his term, has backed Britt as his successor.

The Republican primary is shaping up to be a bitter battle. Trump’s former ambassador to Slovenia, Lynda Blanchard, and Jessica Taylor, the owner of a grant-writing business who narrowly missed the runoff for a south Alabama congressional seat, are also in the race.

Britt, who launched her campaign in early June, raised an impressive $2.2 million in her first weeks on the trail.