Survivor of wreck that killed 8: ‘I’m not strong. My God is’ 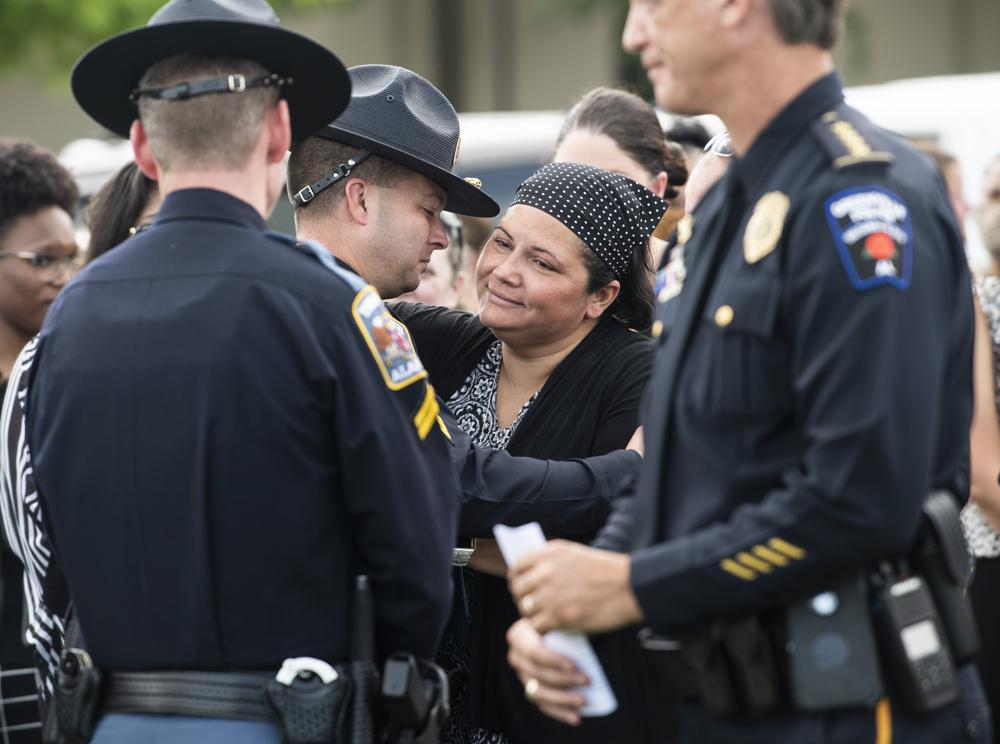 AUBURN, Ala. (AP) — The girls home director who was driving a van that crashed in Alabama, killing two of her own children, two nephews, and four other youths, wept Thursday at a remembrance where she said religious faith has sustained her since the wreck.

Standing before a crowd of hundreds, Candice Gulley, the only person to survive in the van, cried as she said each of the young victims was a “blessing to my life.”

“They were my children whether they shared my blood or they didn’t,” Gulley said in her first public comments about the wreck. “To be around these kids was to be around encouragers … They sought out people who were sad and they encouraged them,” she said.

Tears and laughter filled the Church of the Highlands in Auburn for the memorial service, as speakers remembered the eight children. The crowd at the service included young women who had grown up at the girl’s home and the law enforcement officers and rescue workers who responded to the deadly crash.

The van from the youth home for abused or neglected children was part of a fiery multi-vehicle crash June 19 on a wet interstate that also killed a Tennessee man and his baby in another vehicle. The pileup was the most devastating blow from a tropical depression that claimed 13 lives in Alabama as it caused flash floods and spurred tornadoes that destroyed dozens of homes.

Expressing thanks for the support she’s received from across the country in the weeks since the crash, Gulley said she did not have the strength to get through the ordeal on her own.

“I’m not strong. My God is,” she said. “I have lost my children here on Earth but they were immediately in our savior’s presence.”

Gulley had taken the group to the Alabama coast for an annual trip sponsored by the girls ranch, which cares for abused and neglected girls and is located about 60 miles (nearly 100 kilometers) northeast of Montgomery. The van was returning to the Tallapoosa County Girls Ranch when it wrecked during a tropical storm last month.

The van was carrying eight children ages 3 to 17 when the crash occurred about 35 miles (55 kilometers) south of Montgomery on Interstate 65.

Eight roses sat in vases in the church sanctuary where the public service was held. A program listed the first names of the victims: Bella, Ben, Dana, Haley, Josiah, Makenzie, Nicholas, and Tia, and photos of the young people flashed on a screen. Scenes from young lives cut short. Wading in a creek. A fishing trip. Riding horses. Glam photos in formal dresses.

Speakers shared stories about the children, including how Gulley’s 3-year-old son, Ben, stole the hearts of those at the ranch and how Gulley’s 16-year-old daughter, Bella, had a beautiful smile and loved to help others.

Gulley’s nephews, Josiah and Nicholas Dunnavant also were killed. Josiah would have turned 13 Thursday and Nicholas, 8, was the baby of his family and dreamed of having his own dog.

Ranch mentors Eric and Stephanie Strong shared memories of the four teenagers they cared for at the ranch, including their love of music, kitchen experiments gone awry, and riding horses. During the beach trip, two of the girls saw a mother struggling in the grocery store, and rushed to help, entertaining her children and helping her load her groceries, Stephanie Strong said.

Outside the service, sheriff’s deputies released eight white doves into the blue sky, and a U.S. flag hung from a fire truck’s ladder.

Investigators have not said what happened and no charges were filed, but a preliminary report from the National Transportation Safety Board could be released soon.

Michael Smith, chief executive of the Christian-based Alabama Youth Homes, said “Satan took a swing at us” that day when the van became entangled in the massive pileup as Claudette blew through the Southeast, but mourners won’t lose faith.

“We’re here to celebrate the lives of eight young people that are no longer here with us on Earth but we know where they are,” said Smith, struggling to stay composed at times.

“At the end of this day today, I want you to walk out of here knowing, knowing that the legacy of those young people that we lost will go on living forever at the Alabama sheriffs’ ranches helping more children and young people,” Smith said.

An Epidemic of Loneliness is Bad for Your Health