One of Auburn University’s oldest staff members is making their final flight this fall. Spirit has been a part of the Auburn Tigers Pregame flight since 2002.

Spirit has been a part of the Auburn family after she was discovered in Florida with an injured wing and permanent beak damage. She was unable to be released back into the wild after she was treated and began her career for the Auburn Tigers, which she has been a part of for the last 18 years. After celebrating her 25th birthday this year and gradually developing arthritis, it was decided that Spirit will retire from the football games.

Spirit will be passing the reigns to 5-year-old Independence, Indy for short, who will be flying alongside Aurea during the pregame flights. Indy is another bald eagle that was found to be non-releasable after recovering at the Raptor Center.

Spirit will still be on Auburn University’s campus at the Raptor Center to help teach the public about wildlife conservation and bald eagle lifestyles. For more information about upcoming raptor center events, please visit www.auburnspirit.org

Donations for the Southeaster Raptor Center can be made here.

Spirit’s final flight will be November 13th at the Auburn vs. Mississippi State game in Jordan-Hare Stadium. 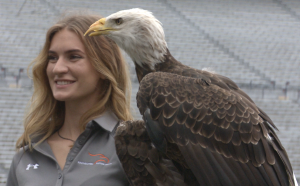