Scattered Showers and Storms Remain in the Forecast

TODAY/TOMORROW: A very tropical air mass remains in place across Alabama, so scattered to perhaps numerous showers and storms will remain in the forecast these two days, but the coverage should be a bit lower than what we have seen this week. Expect partly sunny days with highs in the upper 80s to low 90s. Though rain chances are lower, there will still be plenty of activity on the radars across Alabama, and you can expect heavy rainfall and lightning. Also, showers/storms are possible at anytime, but the greatest coverage comes during the afternoon and evening hours.

THE ALABAMA WEEKEND: The pattern begins to change, and the weather will be fairly routine for late July; mainly sunny days with random, mostly afternoon and evening thunderstorms both days. Rain chances Saturday will be in the 30-40% range, and likely dropping closer to 20% by Sunday. Highs over the week will return to lower and perhaps mid 90s.

FEELING MORE LIKE SUMMER: An upper ridge begins to intensify over the region causing our weather to trend drier and hotter. Still, we will have a risk of isolated showers and storms around each day during the afternoon and evening hours, but these will be few and far between. The days should feature a pretty decent amount of sunshine with highs mostly in the low to mid 90s. 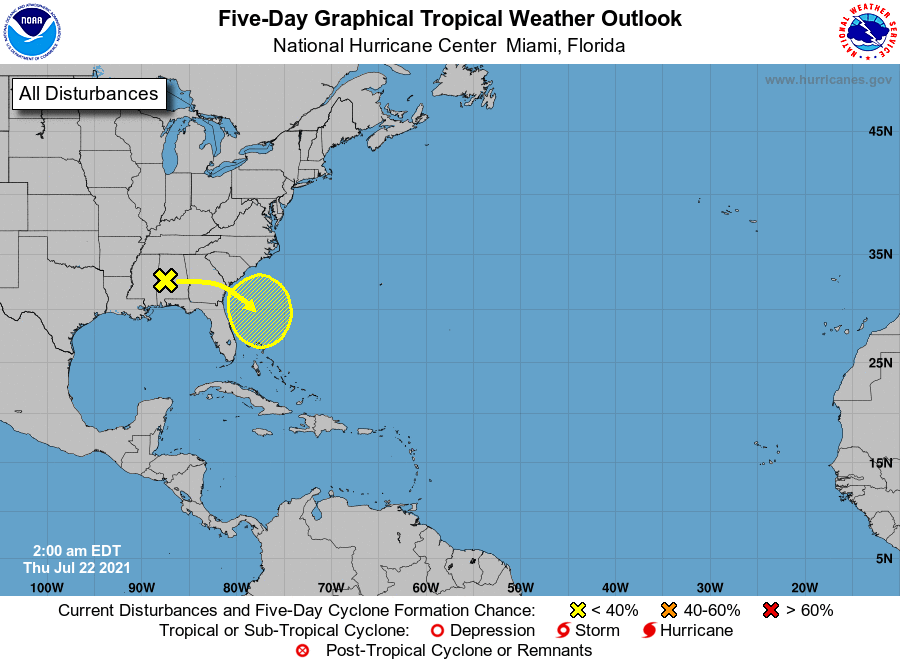 IN THE TROPICS: The Atlantic basin will remains quiet, however, a broad trough of low pressure associated with a dissipated frontal system over Alabama and Georgia is forecast to move off of the southeastern United States coastline on Friday. Environmental conditions are expected to be marginally conducive for some gradual development over the weekend and into early next week while the system meanders offshore the coasts of Georgia and eastern Florida. Formation chance through 5 days…low…30 percent.