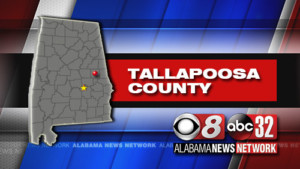 Alabama State Troopers say a Dadeville man has been killed in an ATV crash in Tallapoosa County.

State troopers say 22-year-old William Claybrook crashed the ATV at about 11:58 p.m. Friday. He was pronounced dead on the scene.

The crash happened on Chisolm Road, about 13 miles west of Lafayette. Investigators say the ATV left the road and hit an embankment. Claybrook was partially thrown from the ATV.