A suspect has been arrested — in the case of a Selma Police officer who was shot and killed yesterday morning.

One day after Selma police officer Marquis Moorer was shot and killed in the line of duty — a suspect in his murder is behind bars.

“SBI special agents and other assisting investigators worked non-stop throughout the night following up on tips, leads and interviews,” said Chief Kenta Fulford. 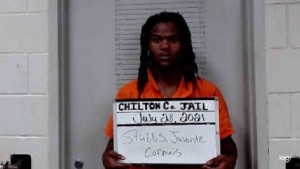 “Agents were able to identify a suspect, Javonte Stubbs, 18 years of age.”

Authorities say Stubbs was arrested early Wednesday morning without incident — at some apartments near Tuscaloosa.

The shooting happened at Selma Square Apartments early Tuesday morning. Officials say Moorer had stopped by his apartment for lunch during his shift.

A young woman who was in the apartment with Moorer — was shot in the leg during the incident.

Jackson says Stubbs is from Selma — and went to Selma High School.

Meanwhile — a black ribbon hangs in the doorway of Selma Police headquarters. And the community continues to mourn — the fallen officer.

The shooting remains under investigation.

Stubbs is set to be arraigned in a Dallas County court — Friday morning.