MPD Starts New Plan to Get Guns Off the Streets 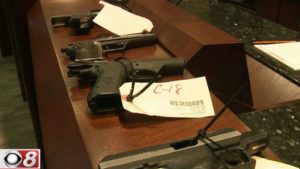 Montgomery Mayor Steven Reed along with local, state, and federal law enforcement officials say they are doing everything they can to fight violent crime in the capital city. They announced the recent seizure of more than 100 guns taken off the streets in the last month alone.

Interim Police Chief Ramona Harris says all of the guns laid out on the table at the press release had been confiscated since June 25th and were used in violent crimes. Harris says most of the guns were stolen from registered gun owners who did not properly lock away their weapons.

Harris also announced that the FBI and the Montgomery County District Attorney will be working together with the police department to get even more guns off the streets in an effort to reduce violent crime in the city. Interim Chief Harris also advises gun owners to properly secure their firearms, whether in cars or in their own homes, to lessen the chance of them winding up in the hands of criminals who could use them to commit crimes.

The city of Montgomery is just one of the many cities in the country that is experiencing a rise in gun violence this year. Montgomery Mayor Reed stated that MPD can’t do this alone, they need the community’s help to get guns off the streets for good.