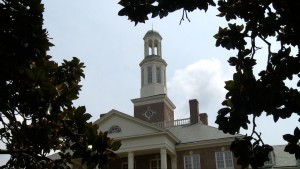 Today is the last day of summer school for students at Judson College in Marion. And with it — the end of academic programs at the college — as the school gets set to shut down.

Lee Andrew Mims of Marion has worked at Judson College for more than 30 years.

It’s how he’s provided for his family — and raised his five children.

He says the school closing — is like losing a part of the family.

“I never thought that it would come to this here,” Mims said.

Mims is part of the few staff members — that will stick around at the college to tie up loose ends as the school closes. After that — Mims says he’s not sure what he’ll do.

“Well, I hadn’t put no thought in it right now but I got some, I got some, I got some offers and everything but I just want to stay here a little bit longer and see whether they can be able to get it reopened or not. If they don’t, I’ll just look at something else,” he said.

Perry County leaders are exploring options for the campus. Albert Turner, Jr. is the chairman of County Commission.

“We’re working daily trying to figure out an alternative. As soon as the board decides they want to allow Judson College to reopen again,” said Turner.

Turner says the college could become a state-run institution — or become a part of the Wallace Community College system.

“In a leadership role we have to prepare,” Turner said.

The college’s Board of Trustees voted to close the 183 year old school earlier this year.