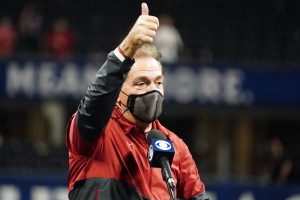 Alabama coach Nick Saban will make $11.5 million in the final year under a new eight-year contract that’s worth at least $84.8 million.

The university released details of Saban’s previously announced deal after the board of trustees’ compensation committee formally approved it.

Saban, who has won a record seven national championships, is set to make $8.7 million this year with annual raises of $400,000.

CFP: Alabama to Play Cincinnati in Cotton Bowl in Semifinal