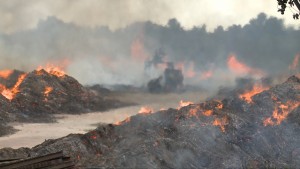 Fire fighters from all over over Dallas County and Autaugaville continue to battle an enormous fire at a railroad cross-tie salvage company.

“We have a big mill that those tracks go to. As well as going into Selma. So, we’re trying to do our best to contain it.”

The fire created a plume of flames — smoke — and ash — that can be seen for miles. 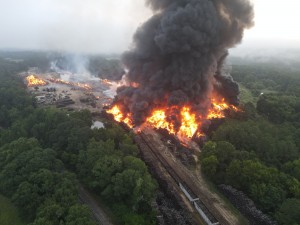 Paul Williams lives about 4 miles away from the fire — on Arrowhead Road.

“People that we know way up off of Highway 22 and everything — can see the blazes way from up there,” said Williams.

The fire started Sunday afternoon and continued to burn throughout the night. It was still raging Monday afternoon. And fire officials say it could keep burning for weeks. 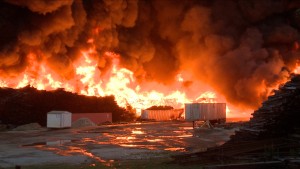 Thousand of railroad cross ties were located on the 25 acre property.

Fire officials suspect lightning — may have started the fire.

“As of right now, that’s what we’re thinking was the cause of the fire,” Brewer said.

Over a half dozen fire departments are out fighting the fire — most of them manned by volunteers.

Drier With Lower Rain Chances for the Weekend