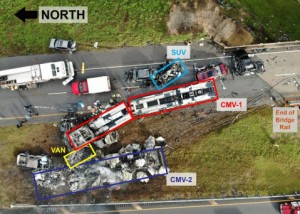 Crash scene from Interstate 65 in Butler County on June 19, 2021 – Photo from National Transportation Safety Board

The National Transportation Safety Board has released a preliminary report on the multi-vehicle crash on Interstate 65 in Butler County that killed 10 people on June 19.

According to the report, 12 vehicles and 38 people were involved in the crash. Eight passengers in a van from the Tallapoosa County Girls Ranch in Camp Hill were killed, as were a father and baby from Tennessee who were in an SUV.

The report says at about 2:20 p.m. that day, a series of minor wrecks had happened on I-65 in that area. As a result, traffic had slowed and even stopped. A tractor-trailer truck hit the SUV, which had four people inside. Then it hit the van, which had nine people inside, and other vehicles that were in traffic.

The SUV overturned and hit several other vehicles.

After that, the report says a second tractor-trailer truck veered and hit a bridge rail and then the van.

The NTSB says that’s when the fire started, burning the tractor-trailer trucks, the van and three other vehicles.

The report says besides the 10 fatalities, 26 others were injured, including the driver of the first tractor-trailer truck and the van from the girls’ ranch.

The report says there was a light rain falling at the time of the crash, and bands of rain had passed through the area throughout the day.

The NTSB says it is continuing to collect data on the sequence of events, the fire, the weather and the operation of the tractor-trailer trucks. It says ALEA is conducting its own criminal investigation.